John Baldessari may have made a good painter. His earliest works evinced his aesthetic eye. In #2 (1963), a tension between representation and abstraction is realized through a scrutinizing approach to a bird (first a subject in 1962’s Bird #1), where a section of the animal is honed in on, closely examined, and “faithfully” portrayed. This makes it worth returning to. Especially considering that Andy Warhol had his first solo show at Los Angeles’s Ferus Gallery in 1962, Baldessari’s earlier picture almost seems to come out of a Pop vocabulary. If relatively nascent, Pop was nonetheless 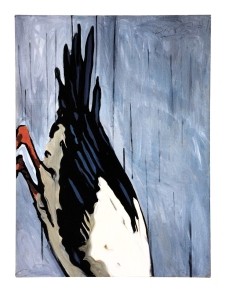 at this point a recognized artistic phenomenon. By 1958, Lawrence Alloway had already published “The Arts and Mass Media,” an article widely acknowledged to have inaugurated its critical reception. But if Bird #1 tends to the new movement’s subject matter, Baldessari’s work resists Pop’s motivating tendency to erase the hand. His is a careful, constructed painting, a series of deliberate decisions. And while Baldessari did borrow the image of the bird from what was to be a billboard advertisement, he seems to have done so more because of an interest in using it as a formal model than for its explicitly commercial signification. (It is significant that the frame cuts off the bird’s head.) The later work, on the other hand, is interested in questions that were forged in an even earlier period of painting. #2 therefore walks that fine line between the grand history of abstraction and its representational roots while lapsing into neither. It is a picture of a different sort than its cousin, but with a similarly individual touch.

But the year 1970 for Baldessari marked an effort to definitively suppress these early successes and to break with the tradition of modern painting. It was in this year that he created his now widely-known Cremation Project, the documented destruction of nearly every painting he had made between May of 1953 and March of 1966. (The aforementioned works, seemingly by accident, escaped this fate.) It is as clear now as it was then that this was an act very much of its time: Baldessari’s attempt to evade the crisis of the easel picture can be seen as a current in a larger wave of artmaking that similarly sought to sidestep the weight of history. But the very trajectory of his career, made evident in his skillfully curated retrospective recently on view at the Metropolitan Museum of Art, is riddled with ambivalent feelings about this rejection. His career is therefore marked by a perpetual to-and-fro; by a series of interruptions and questionings of previous convictions about his relationship to painting.

But if this retrospective teaches nothing else, it is that Baldessari is perhaps the absolute best of his tradition. Arguably more engaging than any other conceptual artist, Baldessari’s chief strength – his breadth of art historical knowledge – was on full display at the Met. Curators Jessica Morgan and Leslie Jones achieved a great feat in beautifully laying out the artist’s creative narrative in a way that fully chronicled his deep comprehension of Western art. Indeed, what makes Baldessari so compelling where many of his conceptual contemporaries aren’t is that he really knows the history he is feeling unsure about. In his 1972 work Extended Corner: Bruegel, the lower right-hand corner of the Flemish Renaissance master’s work is isolated and decontextualized. Bordered by red tape that marks the scale of the actual painting against a white wall, this work reveals Baldessari’s ability not only to quote art history but to also understand its specifics. In this instance, the artist isolates not only a fragment of Bruegel’s painting, but also the issue of scale itself, which has always been integral to the historical problems of painting. It also should not go without mention that another consistency has been Baldessari’s good sense of humor. Whether he is singing Sol Lewitt’s theses on conceptual art or hitting various objects with a golf club, Baldessari’s firm belief that art can be funny is nothing less than refreshing. But while it is enjoyable to have a laugh at the Met, Baldessari can’t push the humor beyond its initial effect. That the experience of many of his works begins and ends with laughter but does not move beyond it highlights his lack of

The first work of the exhibit sets this unsure tone.  A Painting That Is Its Own Documentation, ostensibly from 1968, is composed of six canvases arranged in a rectangular fashion. The work, as the title imples, explicitly lays out its own exhibition history.  The dating of the piece is therefore deceptive. While it was certainly begun in 1968 (we learn that it was “conceived” on June 19th of that year), it has been transformed with each of its subsequent showings. More important, however, is that the most straightforward aspect of the painting (its literal tracking of its own history) conceals what may be most interesting about it: Baldessari’s reluctant rendezvous with the monochrome. As far as I have been able to tell, it seems to have gone unnoticed in the critical literature that the background of each canvas, save for the first two, has been painted with a slightly different color. It is atop these solid fields that Baldessari obscures Kasimir Malevich (to name a historical figure) and Brice Marden (to name a contemporaneous one). If, on the one hand, Malevich was interested in realizing “the absolute” of painting and, on the other hand, Marden emphasized the materiality of his multi-panel works, then Baldessari seems paralyzed by a history he knows too well. Instead of tackling the polarities of this tradition, he attempts to obscure them. But considering that all the panels following the first two are of a slightly different color, one is led to believe that Baldessari has questioned his conviction of evasion. It is important to note that these later additions all came into being after the artist’s 1984 “return to painting.”[1] Essentially, these amendments to the work are Baldessari’s uncertainty. “Maybe,” he seems to be saying, “it is important to complicate that ‘background.’”

But as Karl Marx pointed out in his study of Louis Bonaparte, history has a tendency to repeat itself: “The first time as tragedy, the second time as farce.”[2] Prima Facie: Fifth State (2006) simply recapitulates the same confusions of Documentation many years later. The six panel work consists of the same number of monochrome squares described by text below: “Warm Brownie, “American Cheese,” and “Perky Peach,” to name a few. In this sense, the work is a picture of a picture. It is a set of six plates captioned and then framed. This is not an inherently uninteresting position for a painting to be in. Jasper Johns had already explored this kind of a question in his 1959 work Device Circle. This piece, however, which is “captioned” in the painting plane’s lower register, does in fact contain a physical device. By adding this attachment, Johns retrieves the work from the status of pure image. It is “not picture of something or even a picture of a

picture of something, but just something.”[3] Whereas Johns complicates the captioning of his painting, Baldessari simply embraces the image–in-an-image aesthetic. His captions try to dictate how what they label is to be received. It is, in a word, flat. This tendency is not lost on Baldessari’s critics. As Tim Griffin has written of Baldessari in another context (albeit as praise rather than criticism): “One seeks to exhume content when it is already there, plain to see.”[4] It’s true: You read the text, nod, and move on.

Baldessari’s ambivalence is about a lack of historical place. Conscious of a history of painting he cannot confront, he is, at his best, a painter who refused the brush. Shuttling back and forth between decision and doubt, he seems to know better than anyone else that his work’s greatest strength is perhaps also its greatest weakness: that resolution precludes dynamism. His back and forth is a continuous oscillation between these mutual opposites.

1 Here, a quick historiographic note. It has been suggested by Douglas Eklund (and perhaps others before him) that 1984 is the year that Baldessari turns back to the problems of painting. “The seemingly endless supply of vernacular images and Hollywood stills that Baldessari samples and reconfigures” during and subsequent to this period, it is implied, are the means by which he comes back to these modernist questions. But I’m skeptical about the date because it implies a very broad definition of what painting is, obscuring not only its own particular problems, but also confusing photography as a simple subset of painting. Nineteen eighty six,  with the introduction of works such as Heel (with its signature round ”dot” placed over the face of a man at the top right as well as over the item in the hand of a woman below) seems to be a more appropriate year for the artist’s reengagement with a formerly abandoned medium. For Eklund’s account, see “‘No Success Like Failure’: Deskilling and Collaboration in the Work of John Baldessari” in Pure Beauty (Los Angeles: LACMA, 2009), 79-86.

2 Specifically, Marx is speaking of Hegel’s understanding of world historic events and personages. While I don’t mean to imply that Baldessari’s work is world historic, the metaphor still seems apt.